The film depicts the events surrounding the actual 1973 kidnapping of John Paul Getty III in Italy and the refusal of his grandfather, the multi-billionaire oil tycoon J Paul Getty, to cooperate with the extortion demands of the organized crime Mafia group ‘Ndrangheta.

Principal photography began in March 2017 and was completed in August 2017. The role of J. Paul Getty was originally portrayed by Kevin Spacey, who also appeared in the film’s initial marketing campaign.[5] However, due to sexual assault allegations made against Spacey prior to the film’s scheduled release date of December 8, 2017, the role was hurriedly recast with Christopher Plummer. Twenty-two scenes were completely reshot within eight days, only one month prior to the film’s rearranged release date at Christmas.[6][7]

All the Money in the World premiered at the Samuel Goldwyn Theater in Beverly Hills on December 18, 2017, followed by a United States theatrical release by TriStar Pictures on December 25, 2017; it grossed $57 million against its $50 million budget. For his performance as Getty, Christopher Plummer received acclaim from critics and was nominated for the Academy Award for Best Supporting Actor, along with similar recognition from the Golden Globes, BAFTAs and others.[8] The film itself received positive reviews with critics praising the performances, and received three nominations at the 75th Golden Globe Awards, including Best Director and Best Actress – Drama for Williams. 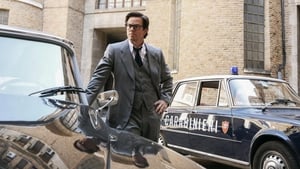